On the third day of my family's trip to Seoul, we visited the iconic Gyeongbokgung Palace! My aunts wanted to hear all about it, so we joined a guided tour. The English-speaking tour was wayyy too crowded, we couldn't hear a word she was saying, so we left and joined the smaller Mandarin-speaking guided tour! #perksofbeingbilingual 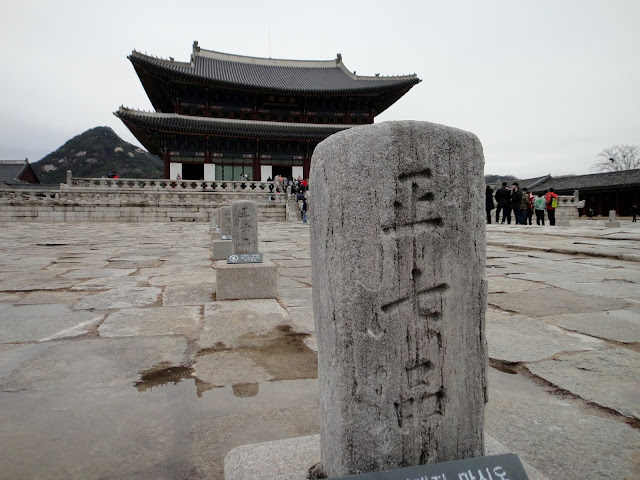 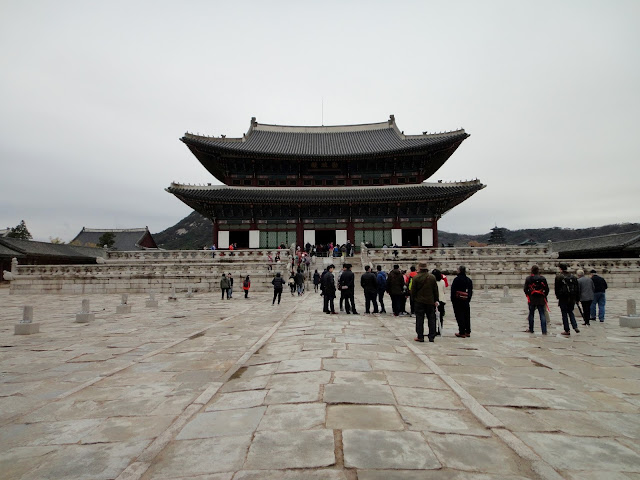 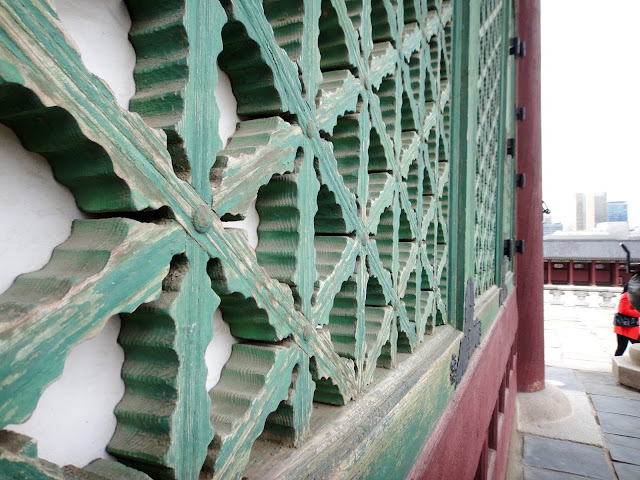 They had statues of animals around the palace, for like, reasons. Idk. These were all animals of the zodiac. Below are photos of the tiger and the rooster! 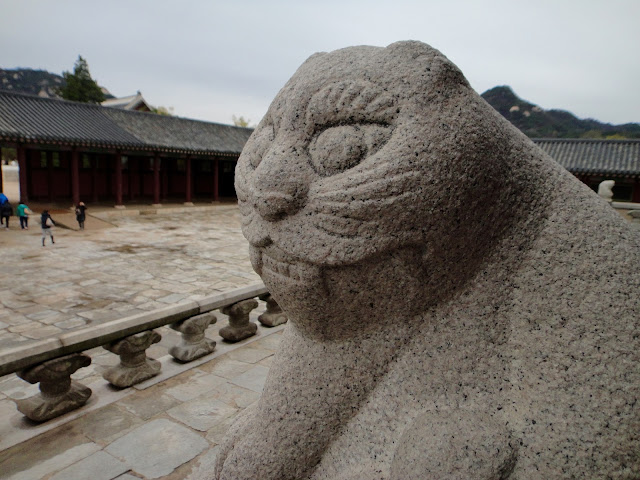 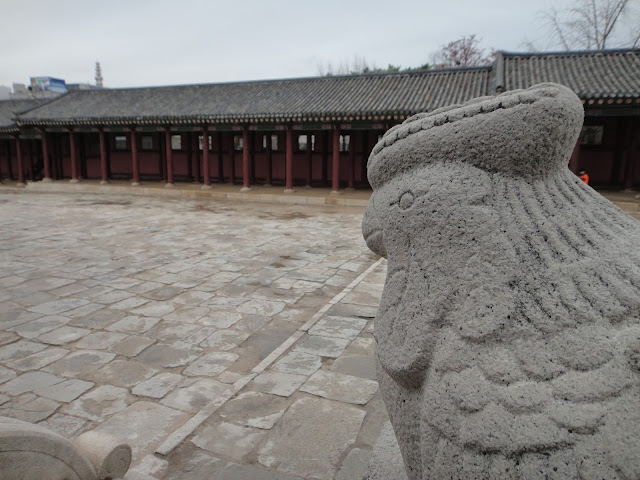 I can only guess that the Koreans from way back when went to the trouble of building a structure on the lake for aesthetic and feng shui reasons. And of course, bragging rights. Oh look, I have a house on a lake! Can your people build such a marvel as well?

They hold such great respect for their king that they surely would want only the best for the king, so no surprise there!

If you look closely at the roof, you'll see little structures on it. Those are actually statues of the divine crew of Tripitaka, the Monkey King, Pigsy and Sandy. The English names for these characters aren't exactly the most flattering for the latter two... In Mandarin, they're known as Tang Sanzang, Sun Wukong, Zhu Bajie and Sha Wujing. I can totally see why these would require an English translation. Except Tripitaka. Like, what is that from? How do they even think of it?

Ok anyway, the statues of the Journey to the West crew are there for feng shui reasons. ^^ 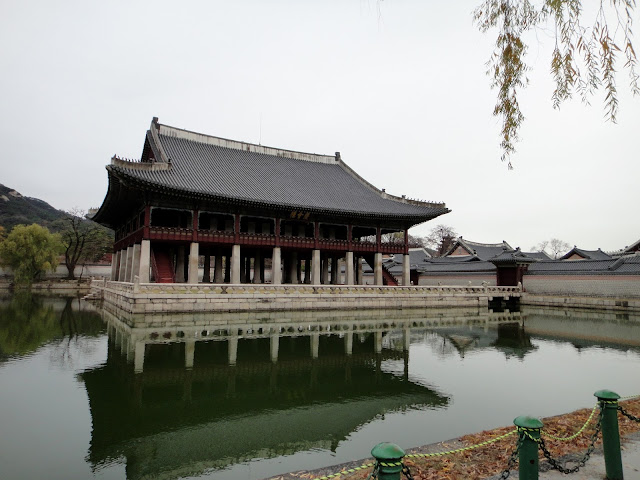 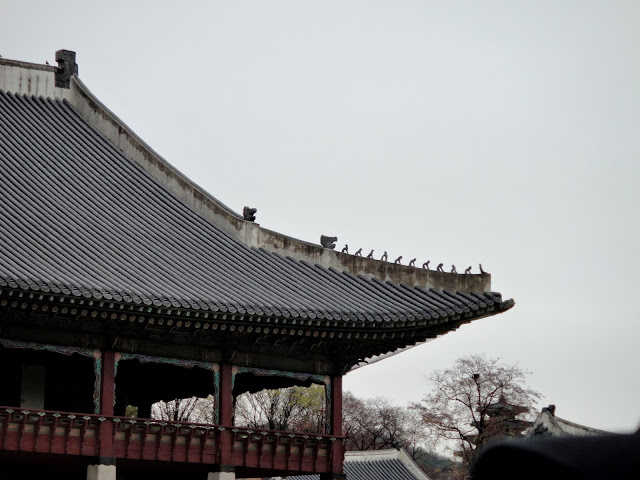 The guided tour was pretty short. It lasted about 1.5 hours. We wandered around the palace a little bit more, just because it was so peaceful. 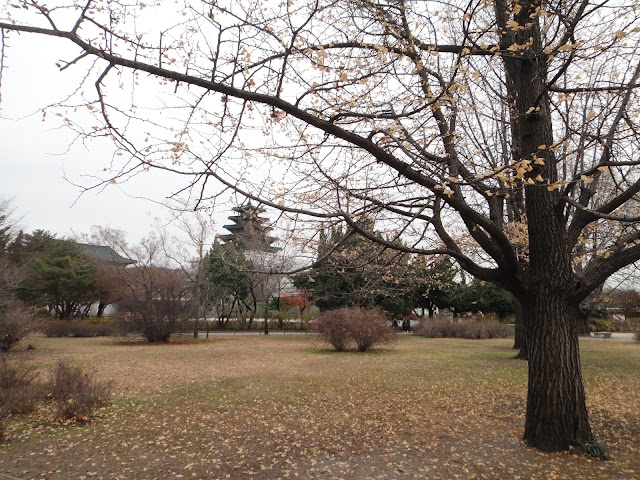 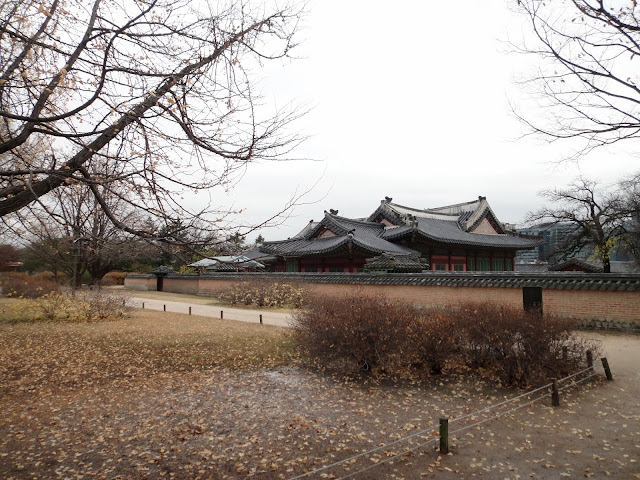 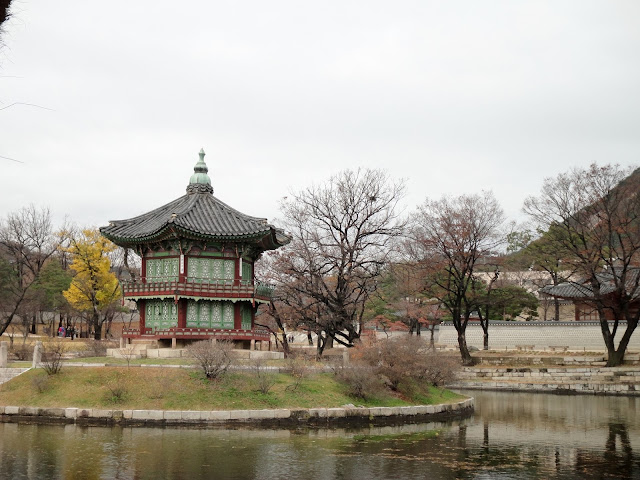 And then we came across yet another tree that was struck by lightning, and the Koreans built support beams to help it to stand. As far as I can tell, these trees are a common sight in Korea where they preserve their heritage! 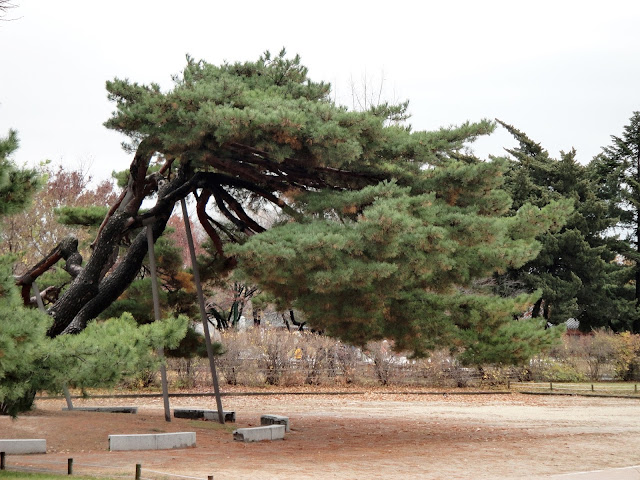 I just had to take a photo of what looked like cabbage used in what appeared to be a flower arrangement! This was located right outside the gift shop/museum. 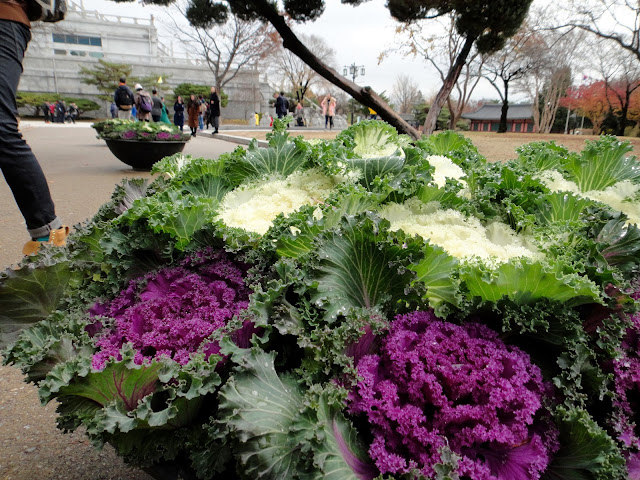 There was also a ring of animal statues - again, the 12 zodiac animals -  next to the cabbage bouquet! 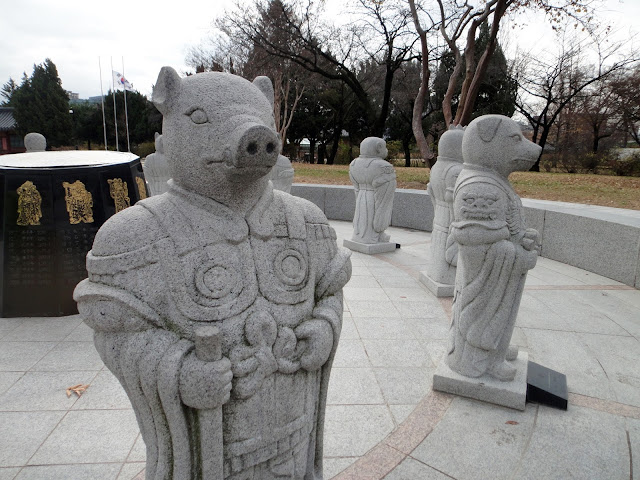 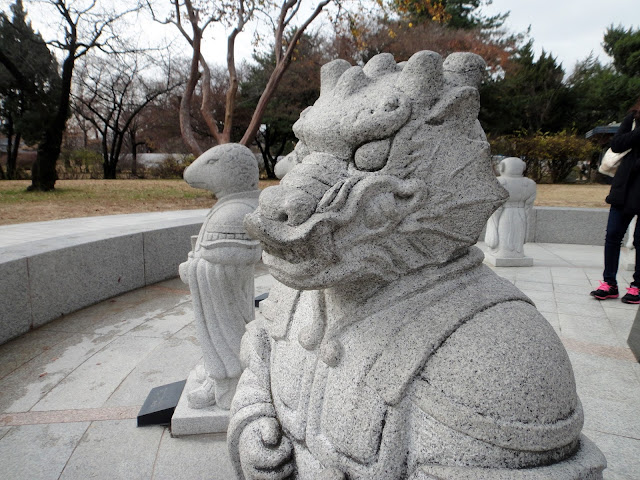 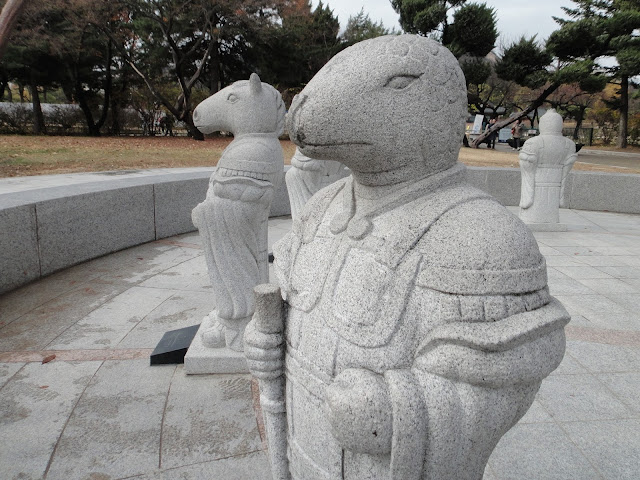 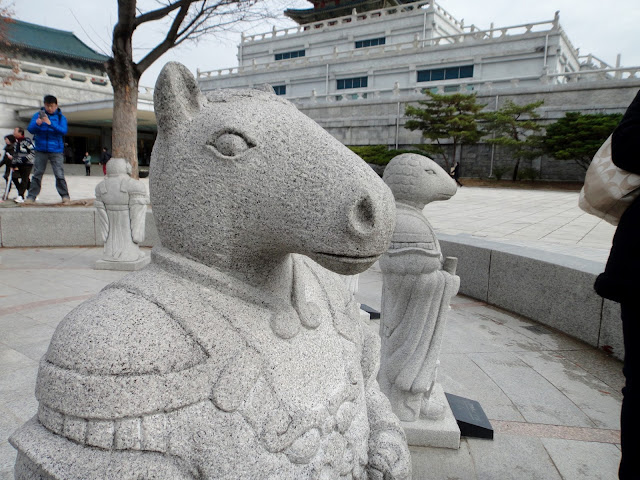 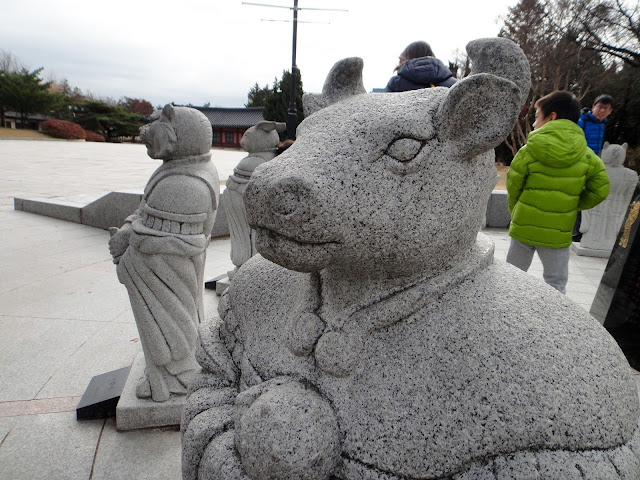 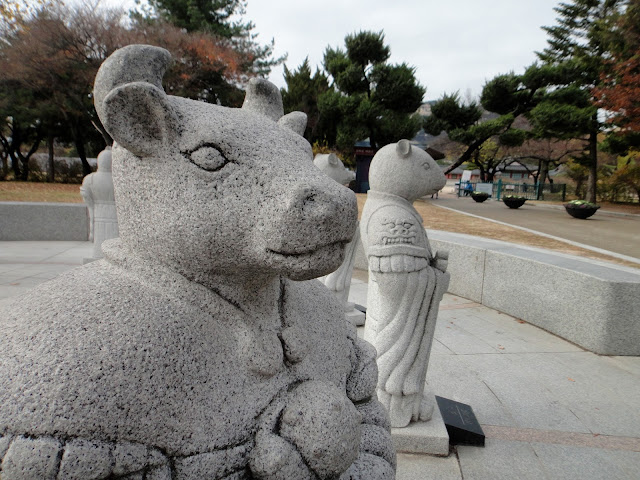 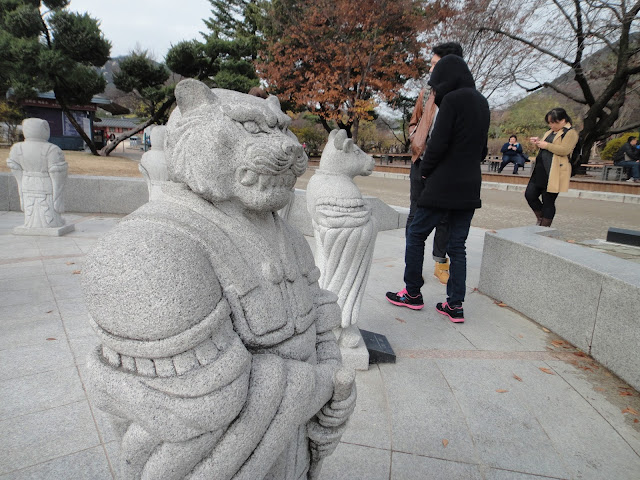 We were pretty lucky to catch the changing of guards ceremony just as it began! 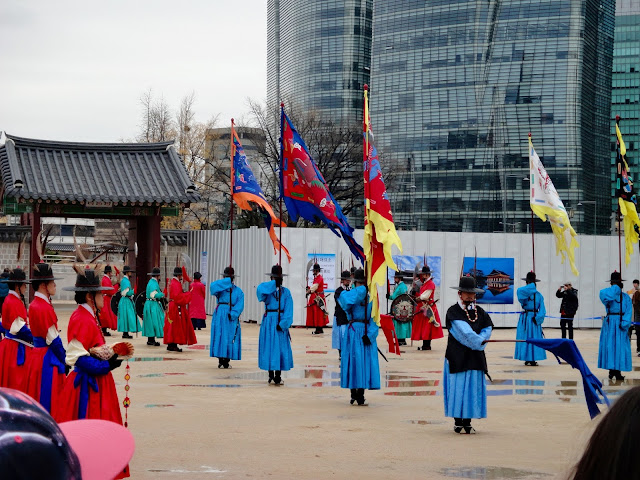 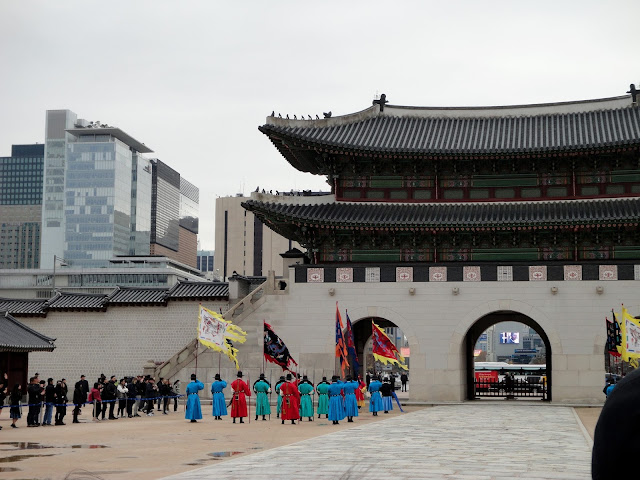 That's my aunt's finger in the shot below. It must be a family thing... when taking photos, I also blocked the camera with my finger on more than one occasion. 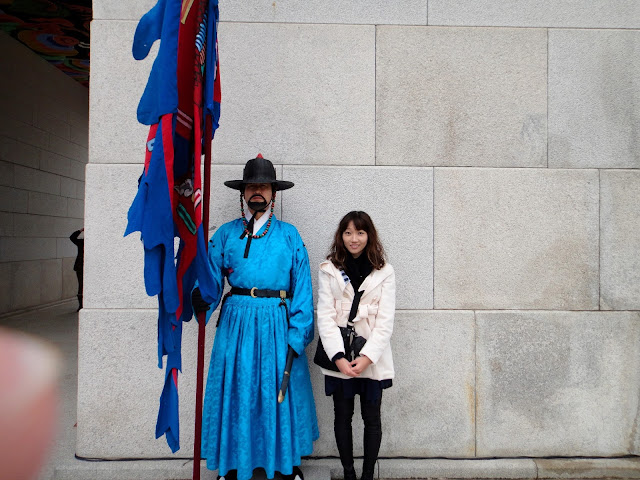 This here is King Sejong. He created the Korean language! The characters below spell out something like Se Jong Dae Huang. I'm no good at romanization but it's close enough.

If I'm not wrong, back then, Koreans spoke Mandarin. Only the wealthy or the educated could speak Mandarin. I suppose everyone else just spoke broken Mandarin or dialect... But the king was like, no way, I'm going to invent a language that's really easy, so everyone can learn it! That was pretty much why he invented the Korean language, Hangul.

The original Hangul characters were supposed to resemble the shape of your tongue when you pronounced them, making it easy to remember. Over time, the characters were modified but it's still considered very easy to learn. There were also only 24 characters (14 consonants and 10 vowels).

I had one hell of a time trying to learn the Korean language though, and there are definitely more than 24 characters... but it's still a lot easier than the Chinese language. 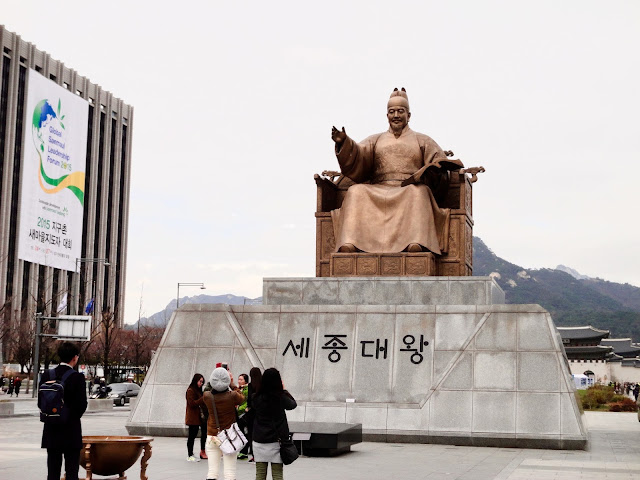 After that, we went hunting for good food! Soups are awesome when the weather is cold, so we headed for a traditional-looking restaurant, Tosokchon Samgyetang! We also popped by a poop cafe.  You can read about it in my upcoming posts- Tosokchon Samgyetang (Review) and Insadong Poop Cafe - Ssamziegil (Review). :)