This is nothing spectacular- at all- but I just wanted to take note that the number of followers I have and the number of people I'm following is now equal!

I did follow the Grumpy Cat though, so the numbers have changed since I took this screen shot. Lol. I must be bored. 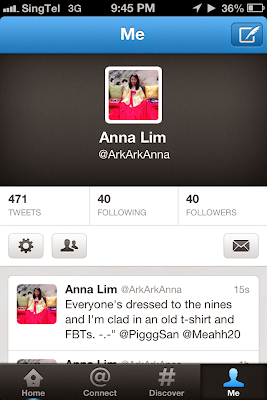 I wonder if my instagram can ever reach a point whereby the number of "followers" and "following" will match up without my interference.

I mean, I can always just unfollow some people, take a photo, then say it matches! Haha. Nah, I'm not so boliao.

To those who don't know the meaning of the Singlish word, "bo liao", here's the slightly crude definition and example of how to use the word in a sentence from...

BOH LIAO
Hokkien for "nothing better to do". Dangerously idle. In Mandarin, it's "wuliao".
"What for he go and do that sort of thing? Must be damn bo liao."

Also, Hokkien is a dialect.

I like my name ANNA, but it's sometimes a pain I get usernames because it's such a common name and I lack the creativity to think of a fantastic username.

My love of chocolates made me go with "ChocolateMe21" as my Instagram name. A close friend of mine actually unfollowed me because she couldn't figure out who that was.

I now use my face in my profile picture so my friends won't unfollow me, THEN come and ask me why I haven't hopped on the bandwagon and join Instagram yet lol.

It does take me a long time to hop on any bandwagon though. I only joined the legion of smartphone wielding people in 2012. Before that, I was using a flip phone... WITH NO 3G. *cue horror music*

Ah, those days... When I can laugh at my friends for poking the screen of my flip phone since they're used to touch screens, then being so embarrassed to realize that my old flip phone didn't have a touch screen.

But I'll take a smart phone anyday. Used to it already! Haha. I'm sure many people can relate to this!

Have a great day, everybodehhh~