Remember some time ago I mentioned that I just changed job?? In an blink of eyes, 1 mth had already past and I've received my first pay check!!! Well, Im still adapting well and is trying to learn the ropes as fast as possible so as to not let my fren who referred me into the company, down. Eventhou there's quite an age gap between me and colleagues, they all treat me quite well!! Just that some may be abit long-winded and keep repeating the same thing 'n' times (u know...those older generation de ppl style)...so the technique of FIFO is v impt here!!

And jus nice, i made it in time to register for the company annual dinner and the theme is: Retrolicious and is held at Sheraton Hotel located near Newton MRT. The official release time on that day is 3pm, which gives everyone ample time to go home and doll up!! However, i had an errand to run! I need to collect my famous amos voucher from voucherlicious located at international building between 2-6.30pm and its only available during weekdays!! i work till 6plus everyday, how to collect?? now that there's a chance for me to collect, i shall jus grab the opportunity!! HAHA~~

Immediately after that, i wanted to cab home cus im already running late!! when i saw the queue at the taxi stand in front of international building, i nearly fainted. there's at least 20 ppl in front of me!! just nice, bus 57 comes along and i saw that its heading towards bishan, so i boarded it!! luckily the bus came and saved me! LOL...

Upon reaching home, I faster cleanse and prep my face, before applying makeup!! First time attending the company's dnd so must doll up abit (who knows, i might bump into a cute guy there?? LOL) Then i donned into a pink polka dot dress and tied a pink ribbon hairband (both are loaned from weiting...save $$$). well, i dun have the makeup brushes so i din use any of the technique learnt at the korean makeup workshop! however, for the blusher and lip i did follow wad the trainer taught me~


As I din wanna be late for the DnD, i cabbed there!! and there's a huge jam, thus the journey cost me ard $16 bucks. luckily there wasnt any ERP on the way if not it will be even more ex!! As usual, i did a selca in the cab!!


After loitering in the loilet for 15mins, i decided to come out to take a look ard the hotel since im there alr! so i found a sitting area and sat down. Since i got nth to do, so i took selca again!! wad else can i do with a camera in my hand?? :p

I decided to go up alone to register first, and also to take a look at the stalls that is outside the reception area!!
After which, i saw a loooooooong queue!! Having a singaporean nature, of cus i went ahead to take a look! and its a caricature drawing on lil t-shirt!! and it was so adorable! so i went ahead and queued for it. and lucky me! i managed to squeeze into the last 5 slots!! HOHOHO~~


After 5mins or so, ITS DONE!! (but i queued like 45mins =.=)
Well, good things are worth waiting for, aint they?? Does it look like me???
After wilson arrived, we quickly went inside the ballroom to 'chop' seats. ie: the seats with the best view to view the stage and also, the seats furthest away from the boss/manager :p

And guessed whats my ticket number?? 8384 T.T
Guthrie Got Talent is up next and my colleague, Thomas went to join and he got second!! Congratulations! psssss...he was the 1st runner up of huang jing nian hua dou ge jing yi!! and he's teaching at several cc now too!!

Well...all i can say is...this is the most boring dnd i've ever been too =(
Mayb cus my table is all uncles (except wilson) and they are not at all, interested in any of the table games or any other games at all. only when there's lucky draw, then we got all hyped up. Well, wad to expect from uncles right? so basically im jus sitting there and watchin performance, eating the food that is served in front of me and then, stone~~~ HAHA 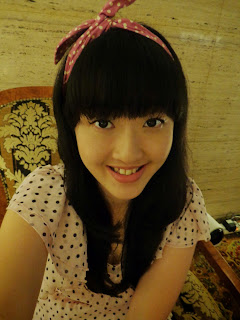 p.s. i din meet any cute guys at all!! T.T
Labels: dnd retro