Online Shopping- Sometimes you're lucky, sometimes... you're just not.


You know how sometimes when you buy something online, you get lucky and manage to get something that you actually like with no defects and reasonable quality for the amount of money paid?

I chanced upon a livejournal blogshop, Zashion. The items look pretty nice, and at very low prices!! I know that items can come crappy but sometimes I take a chance, like when a pair of earrings that I've been wanting costs $1 mailed. ^^v

I placed an order for two pairs of earrings, totalling $2. Woohoo~ Ok so while I was worried about the quality, I was very sure that I would at least receive my order, due to positive past experiences. Generally, it takes around a week or less for parcels to arrive, even those from Korean (Gmarket aka Qoo10). This time, it took more than a month to get 2 pairs of earrings! It's an unreasonably long period of time!

Not being in any hurry, I was patient. But a pair was sent to me broken. I was not pleased, to say the least. So I'm here to vent.

(If you don't want to be dragged into my dark vortex of negativity, scroll to the bottom to the photo of the earrings, I've calmed down considerably by then. LOL. ^^)


I used an enquiry form on the Zashion website to contact the seller, and received a reply on 30 December 2012.

I sent the same order, but in the proper order form format and with proof that I had made payment on the same day- 30 December 2012. 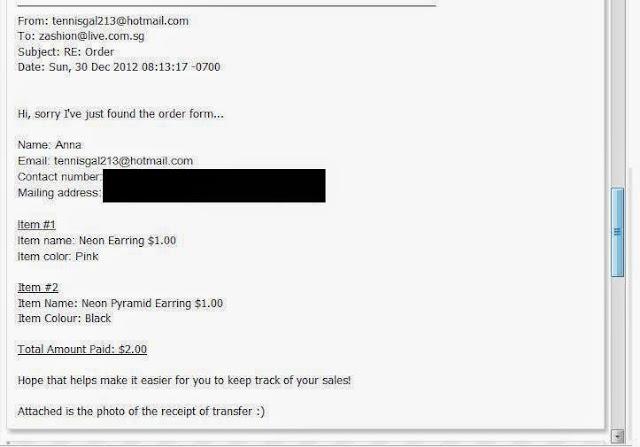 Following which, I heard NOTHING from the seller and even forgot about it. So, I contacted her more than a week later:

(Read the following emails in this section from the bottom up. ^^)
I got the impression that she had forgotten about my order.

She took 2 weeks to get back to me to clarify my order!


There's no apology nor explanation provided for the long time taken to process my order. >:( 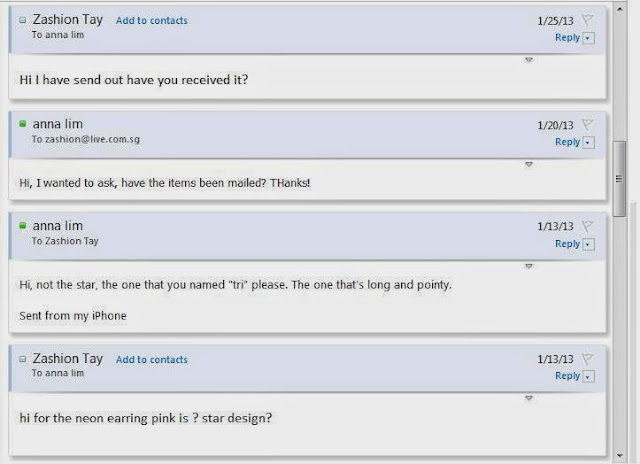 I was thinking to myself, OK Anna, chill. Maybe she's too immature or inexperienced. You're in no rush anyway. Give her a little more time and you'll get your earrings.

She also avoided my question when I asked if the items have been mailed out,  which made me feel that she did not mail it out at all.
*FUMES OF ANGRY DARK CLOUDS COMING OUT OF MY EARS*

And... I didn't hear from her AGAIN. I really didn't want to deal with this any longer, so I asked if she could cancel the order and give me a refund.

It has been over one month since I've confirmed my order and made payment.

Don't get me wrong, I'm not hard up on $2. I just refuse to let her take my money with such bad service and incompetence. With just one apology or explanation, my frustration would've been lessened considerably!

I heard no word from her AGAIN. OMG. So I was thinking to just leave it alone... although I did daydream about reporting her to the authorities for dishonesty. Just daydreaming. That'll never work in my favour anyway. Haha I get carried away sometimes but I'm a nice person in general ok! ^^

Tried to feel relieved that I had only lost $2 and not a larger amount of money...

But SURPRISE!!! I received the earrings two days after asking for a refund! BUT the pair that I really wanted was broken beyond repair.

I e-mail her about it. I can't stand the idea of this incompetent girl taking so long to mail out my order, and yet I've got to content myself with defected goods??

As you can see from her reply below, she is either not very good at talking to people, or she is just plain rude.

Why would any seller tell their customer that she is unable to place the blame of lost mail on the customer?? That really makes my blood boil. As if the possibility of it being my responsibility even exists!

Secondly, she's telling me that the reason why my earrings are broken is because it's sent using normal postage??? The heck is that reasoning!

Again, note that there is no word of apology. >:(

If Singpost really lost it, I don't blame her of course. But what she should've said to appease me is something like "I'm sorry that the parcel has not yet reached you. It could be lost in mail. Please understand that..." and continue with her last sentence!

I didn't want to pursue this anymore, seeing her attitude. It'll be useless and I expect her to ignore all of my emails anyway. So I replied, trying to be as polite as I can in the face of my lava hot boiling blood:

No surprise, I HEARD NOTHING FROM HER AGAIN. No etiquette to send an acknowledgement. I know nothing about running a business, but this is NOT the way to do business (in my opinion la). 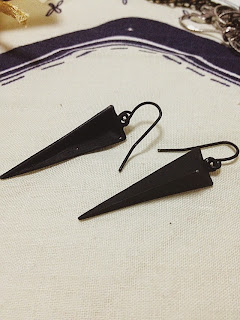 At least the other pair I received is something quite nice too... but too bad the back of it is hollowed in instead of it being a solid earring. I can totally accept this quality for the price I paid, but not the broken ones. Lol.

I wore it out three times already, quite pleased with how pretty it looks.

Some of you may feel that it's just a small online business, why harp on it? Why bother about customer service? Normally, I couldn't be bothered. But this one takes the cake. Exceedingly slow and incompetent. So, I had to vent.

I do appreciate her offer to mail out the parcel again, and both pairs of earrings came in a pretty nice little bag.

*NOTE: I have no idea if the seller is a male or female. By default, I referred to the seller as a female.
Labels: online shopping review