Finally met up with my good friend, Marie! She's one of the few who entertains me and even joins in on taking photo/videos of random things! :P As demonstrated below: 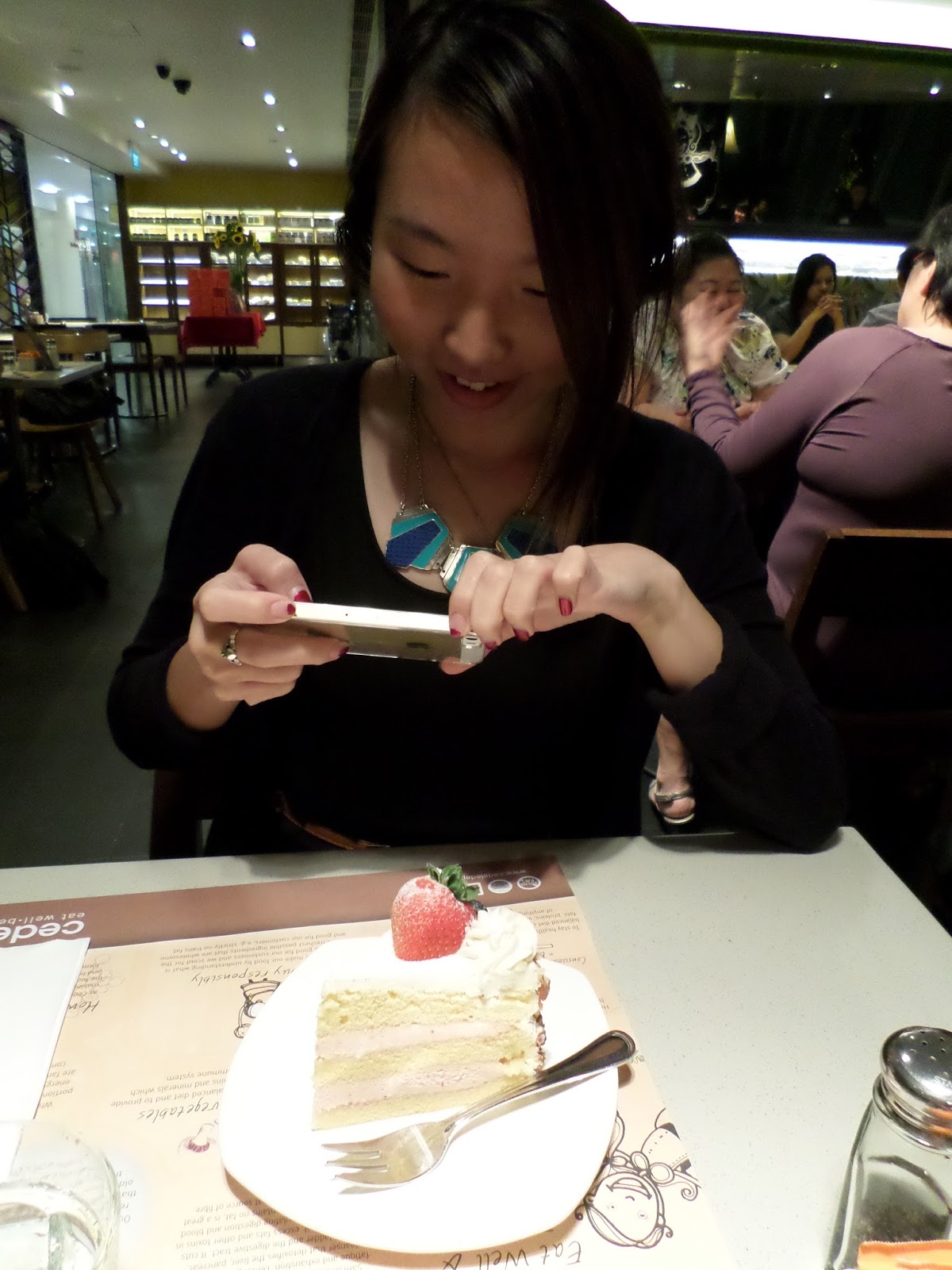 Met her at Wheelock Place's QCD Technology on the fifth floor, where she got her MacBook Air checked out. Service was pretty good, personnel didn't seem local.

After that, we were starved and headed to Cedele!

Service: The closer it got to closing time, the more negligent they got. But still not bad. Needs cake cutting practice! ;)

Here's a #mildlyinteresting video of the badly cut slice of cake... a piece fell off. Marie and I tried to put it back and recreate the moment and film the full erm, falling of the crumb. Haha, the things that silly and bored girls do...


Here's the badly cut cake, you'll see why the crumb can fall. 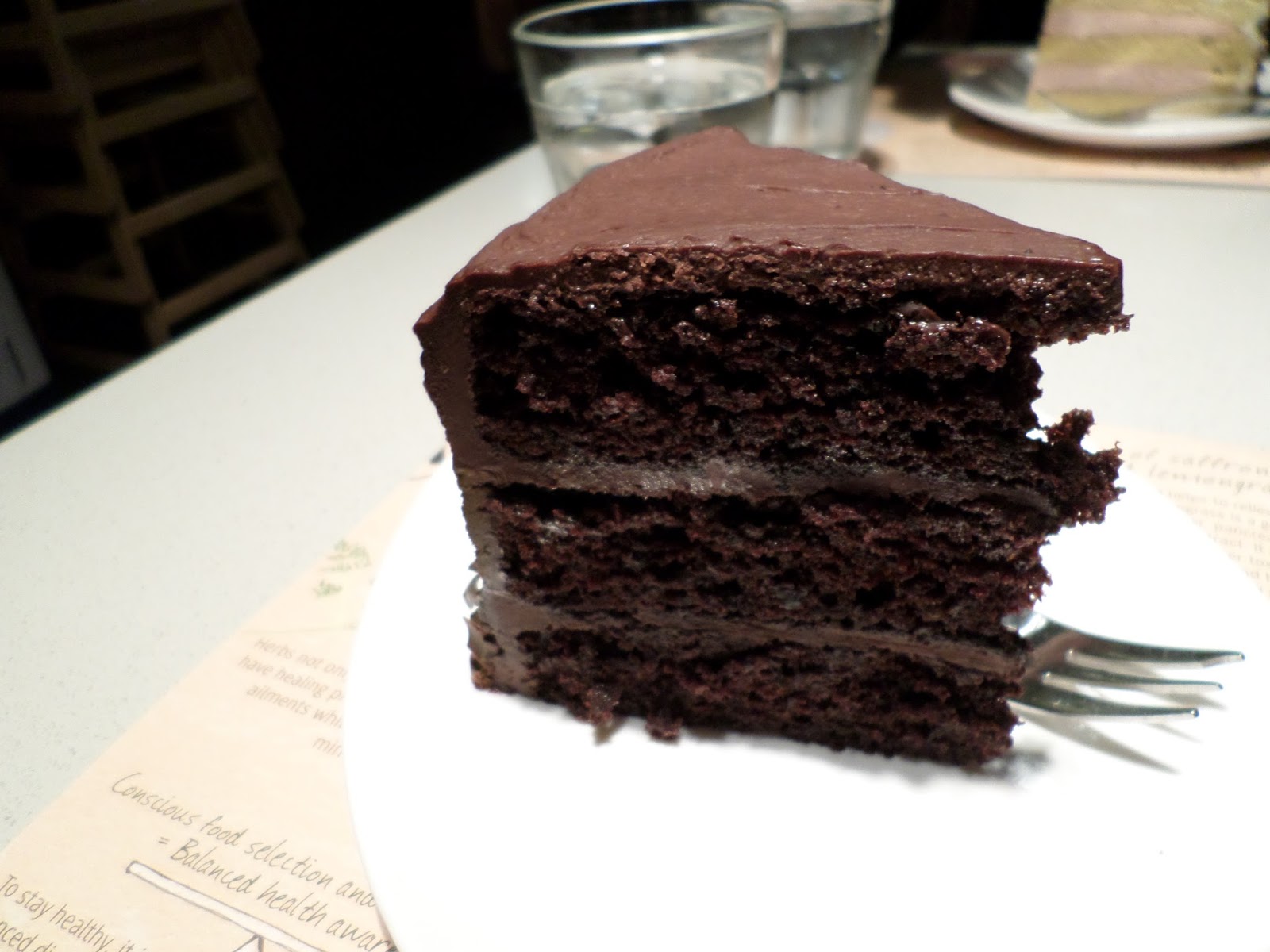 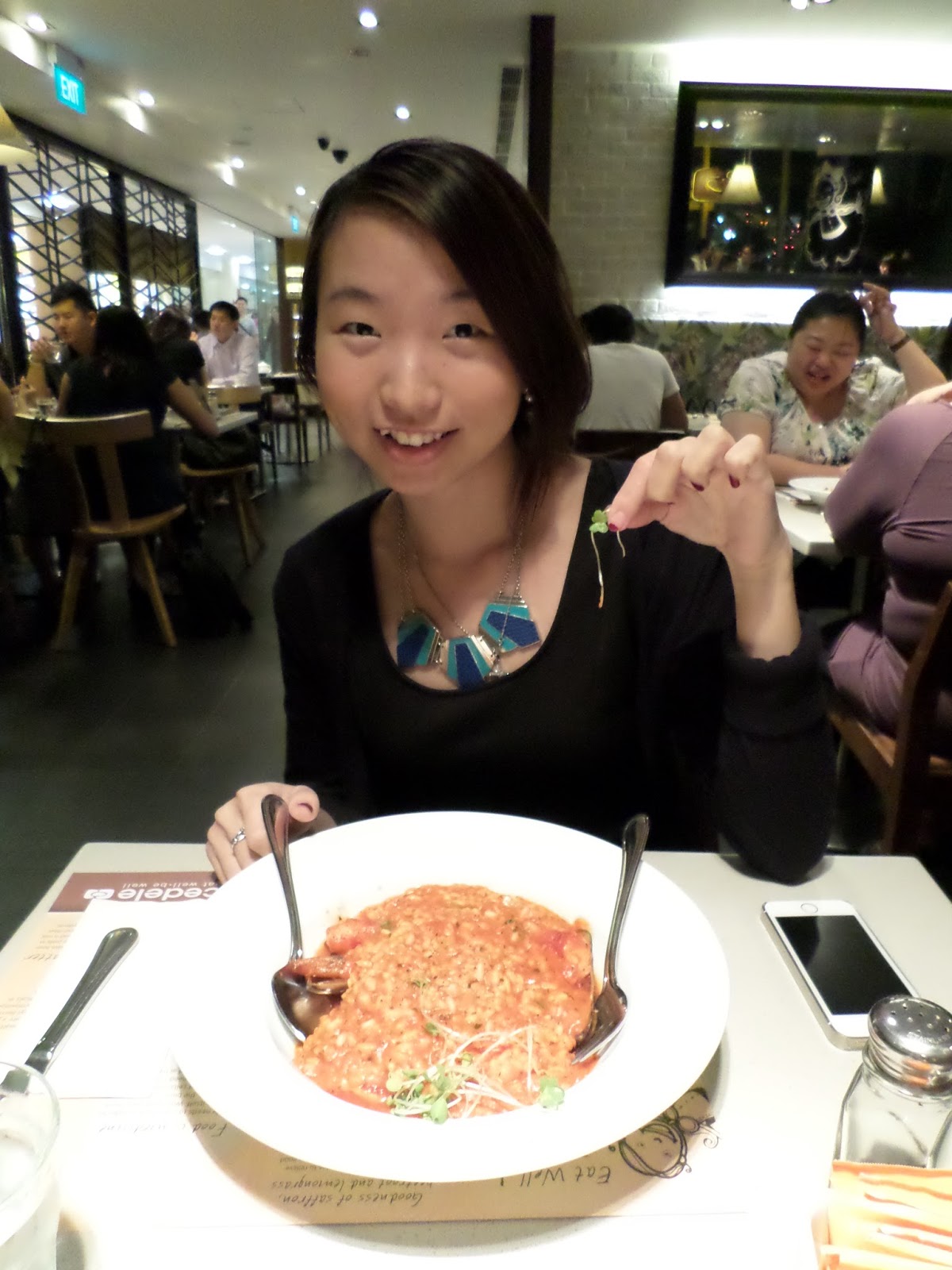 1. Seafood Risotto (~$17)
The rice could be a little undercooked, and it would've been better with more variety, because Marie got pretty sick of the taste halfway through. Not bad, though. 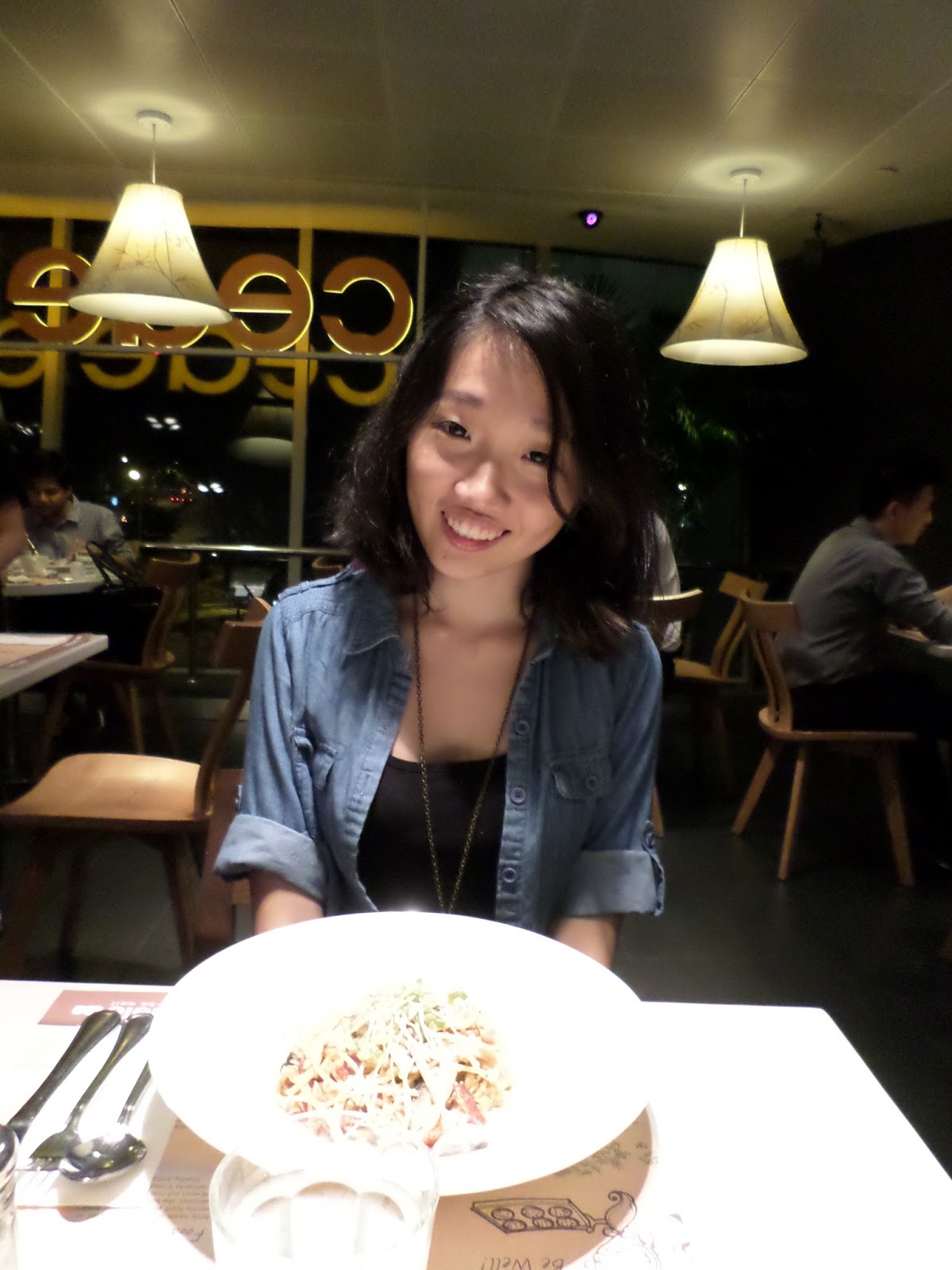 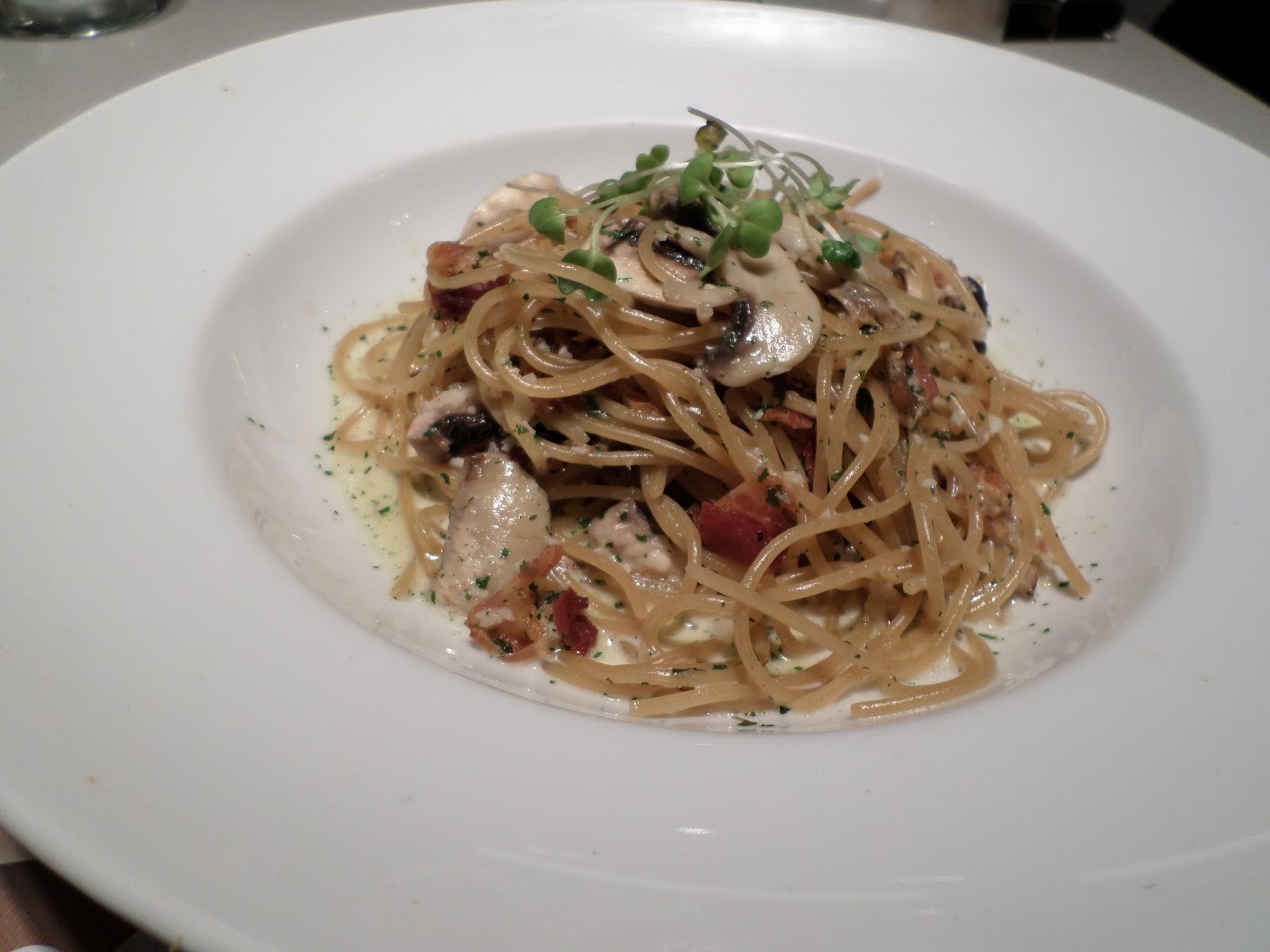 2. White mushroom and Bacon Pasta (~$15.90 before GST)
I really enjoyed it! You can choose from penne, linguine or wholemeal spaghetti, and I decided to choose wholemeal since I don't remember ever eating that before. It was a little hard, either undercooked or wholemeal spaghetti is naturally harder. They gave a substantial amount of bacon and mushrooms, which was super yum! 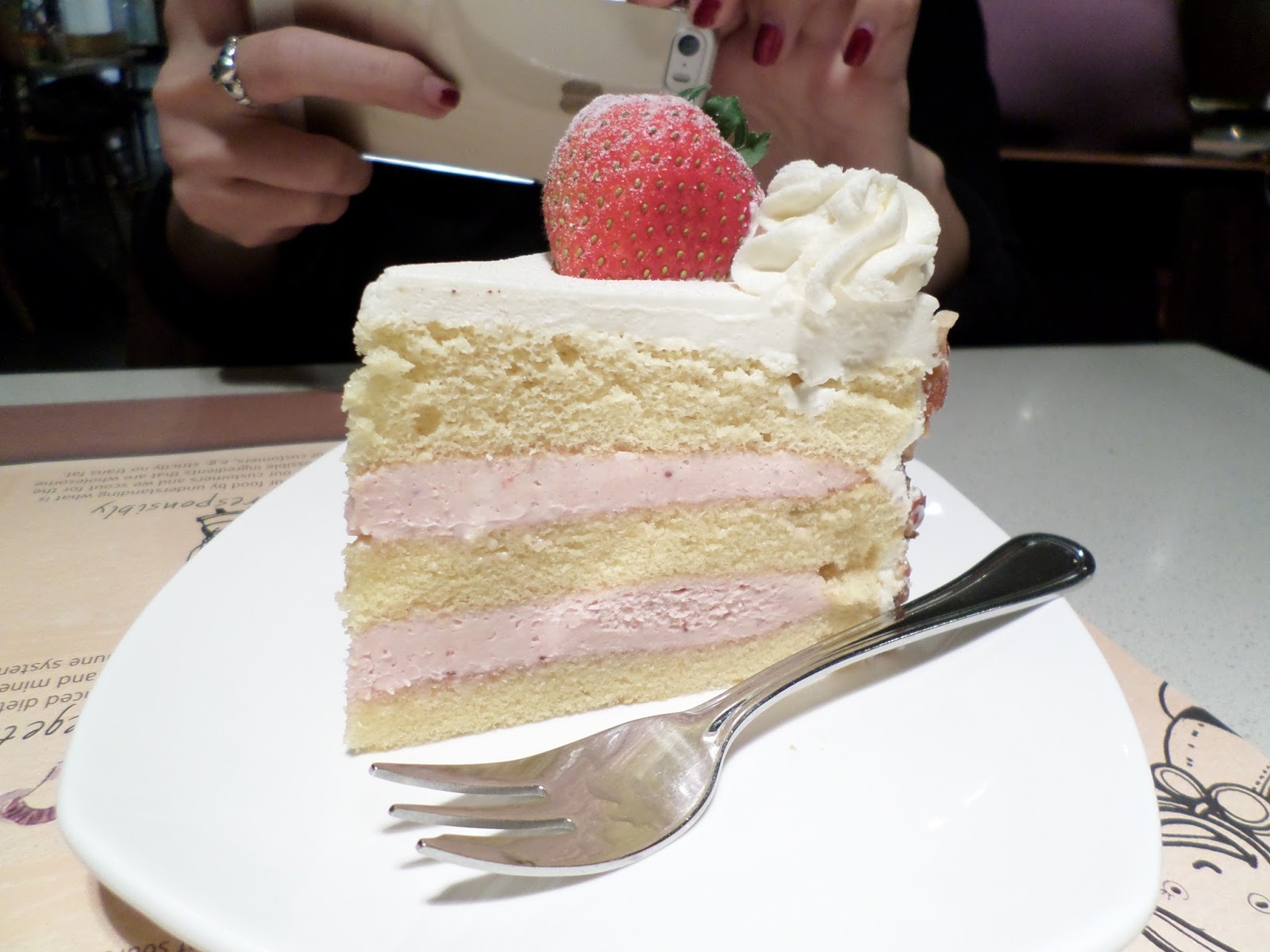 3. Strawberry Field Cake (~$7)
Marie really loved the look of it, and even more so of the taste! It's on her list of possible cakes to buy for her birthdays in the future. I just found out that this list existed today LOL. Huge strawberry on each slice, good balance of the cream and the oh-so-spongy cake, with a tangy (?) strawberry taste that isn't too overpowering. Nice! 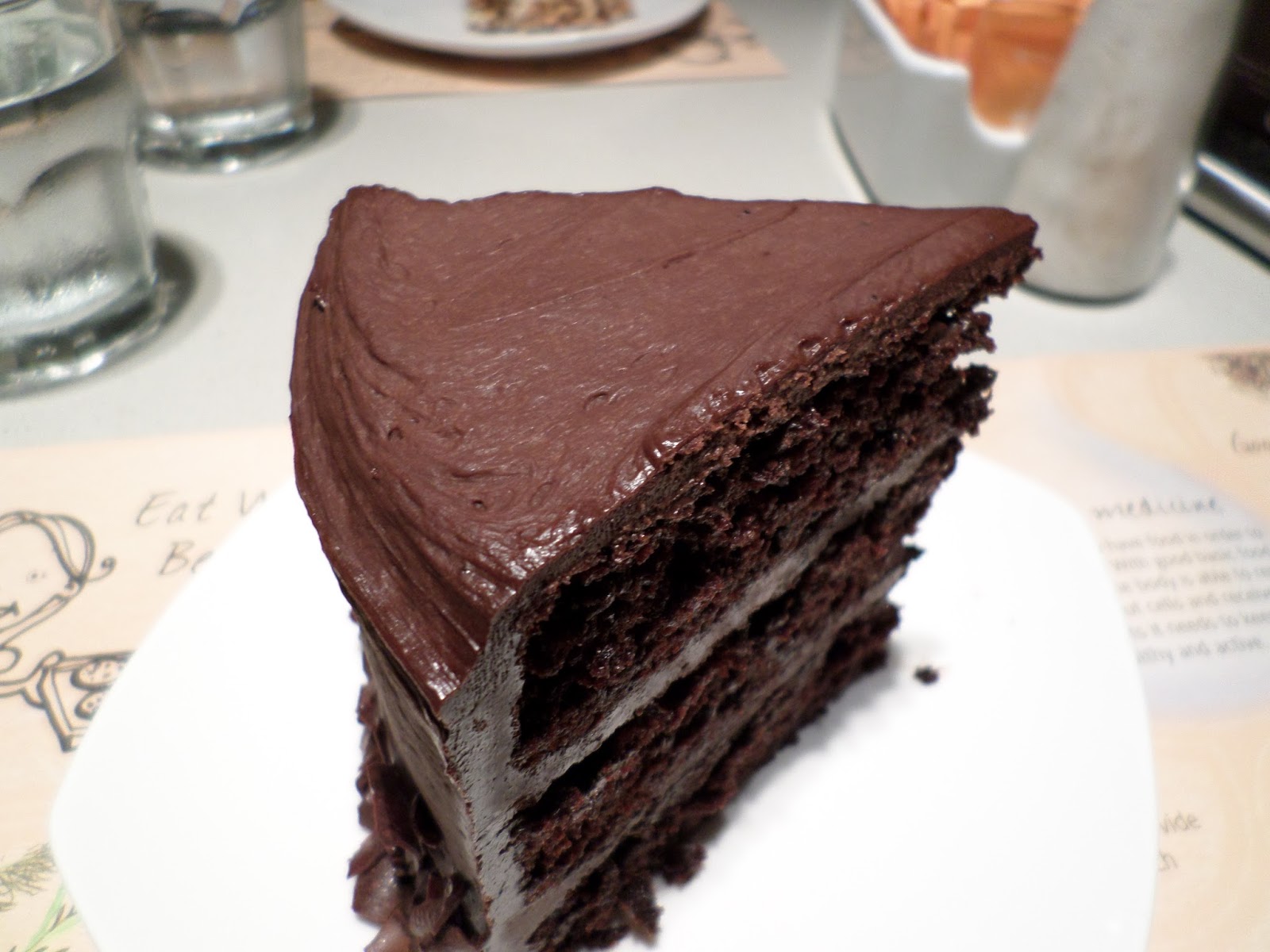 4. Some sort of fudge cake ($7)
Not bad, but slightly too dry and thus, hard to swallow. Very sweet, which was nice. It would've been nicer if the cream wasn't so sparse... 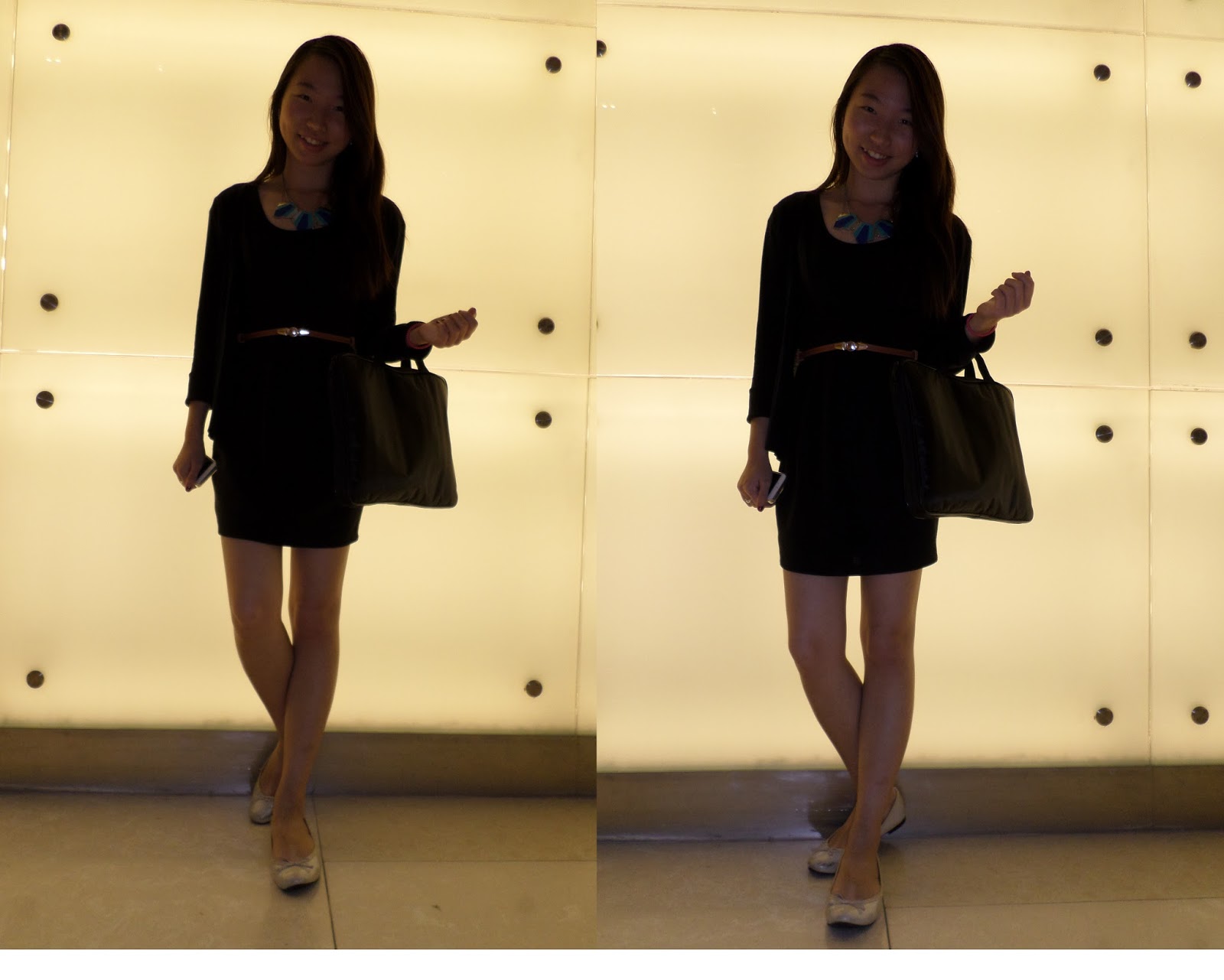 Kinda OOTD... can't see much but at least her silhouette looks good! Haha 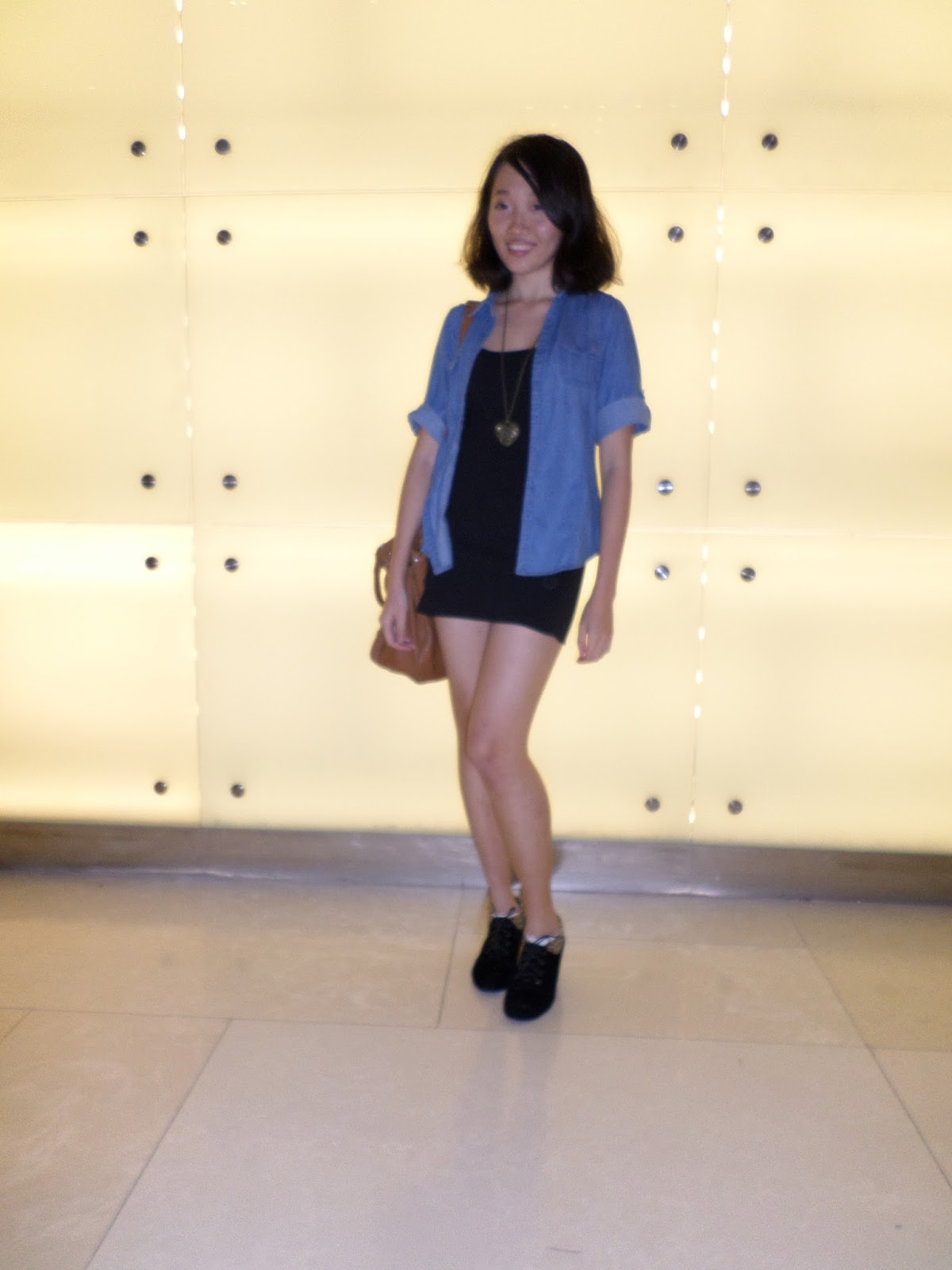 What I learned... I need to learn how to pose. It's ok, I just need practice. Lol. 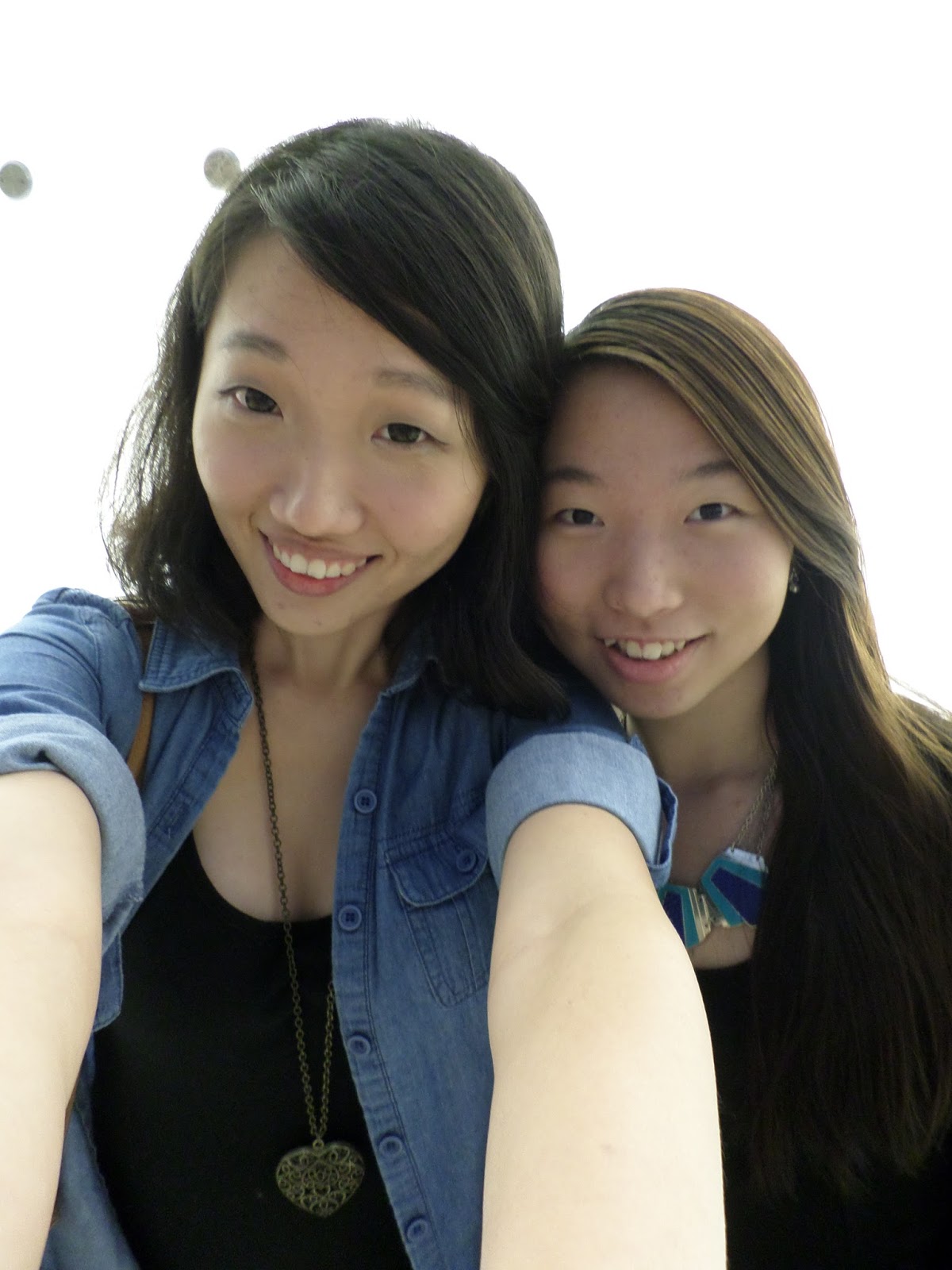