Unbeknownst to most people around me, I went to South Korea for a 5-day break!

Now, I wouldn't spend money on a flight for just a 5-day trip. Luggage packing, uncomfortable hours on a plane, etc... don't you think that five days are so not worth it?

Nah, this was a family trip.

My two aunts were uncomfortable using a camera and my brother just didn't want to help me out, so I don't really have pics of me... but at least it was an enjoyable trip!


We flew from Singapore to Malaysia, and transferred after an hour long wait. Flying with Air Asia was a pretty awful experience (read my short rant here).

We arrived in the morning at Incheon International Airport. It's huge, clean and its washroom is free of unpleasant smells! I have the mention the smell because well, the one at Malaysia was clean but smelled strongly of pee.

There's two affordable ways to get to our hotel in Seoul: subway or bus. My brother mentioned that a cab would cost about S$100, so... no way. We opted for the bus. At around Gate 12, if my memory serves me right, is a ticket booth where we bought our tickets for bus 6001. Each ticket cost about S$15, and it was well worth it.

Despite the spacious seats on the comfortably heated limo bus, I still almost vomited from motion sickness. The ride took about one and a half hours.

We alighted the bus at the wrong location. I felt like we were forced off, because the driver was 100% confident that he was right, and that we were holding up his bus schedule. Our hotel was the Ramada Encore, and we alighted at Ramada Seoul. Just because it says "Ramada", doesn't mean it's the right place, okay! Look at the photos I Googled to compare these two hotels, they're so different!

But if I were to look on the bright side, the crisp cold air was AMAZING for my nauseous self!

It was tough to get a cab in front of Ramada Seoul Hotel at 1pm! My aunts were exhausted from the flight and were crashing without their morning cuppa, so we popped into the cafe nearby. I was too nauseous to care about the name of the place hahaha. Check out my post about the cafe here!

After our break at the cafe, we hailed a cab.

And after more confusion, whereby we had to ask the front desk staff member at Ramada Seoul Hotel to discuss with the cabbie to figure out where our hotel was located, we finally arrived at our hotel in 15-20 minutes!

So if you do book at this hotel, get a map or photo, etc. Be super prepared to have a little bit of trouble finding it!

It's worth it though. Spacious enough, clean, great service, affordable, accessible by trains and buses if you know where to alight...

I booked through Agoda because there was a sale. 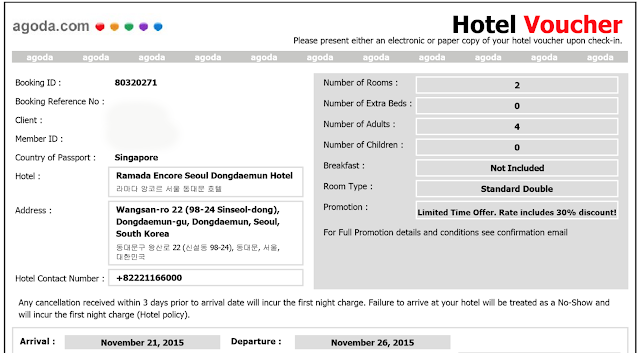 After a two hour break in the hotel room (we like to chill, okay?), we ventured out on the streets! First stop, exploring the vicinity of our hotel and Dongdaemun! That'll be the next post- check out Part 2 of my Korea trip here! :)