On my fifth day to South Korea, my family and I visited the beautiful Changdeokgung Palace (창덕궁)! There was a slight drizzle that day, so it was bitterly cold. I took comfort in the pureness of the morning air... or maybe it wasn't pure but I just thought it was.


In any case, my brother was thrilled for our tour. We usually avoid tour groups, but my brother really wanted to see the "damn pretty garden because it's fall leh".

You see, anyone can view Changdeokgung Palace- there isn't an entrance fee. However, to view certain areas, you've got to buy admission tickets to enter. I guess it's because it's a restricted area that they named it the Secret Garden tour. Each ticket can set you back 8000 KRW. Check the Korea Cultural Heritage Administration for the admission costs and time slots!

Please ignore my chipped manicure. I forgot to remove my nail polish before my flight to Korea hahaha

I've noticed a recurring pattern for my recent trips abroad. I prefer not to travel when the weather's cold in the host country, but due to time restrictions, I usually end up travelling during fall/winter. As such, most things are dying/dead by the time I arrive. Just like this bush above.

Anyway,  built in 1405, Changdeokgung Palace is the second royal palace in South Korea. The first was Gyeongbukgung Palace, which I visited on Day 3 of my trip!

Like Gyeongbukgung Palace, it's also mostly restored. It was also burned down during the Japanese invasion, and rebuilt in 1611. Even so, I love the architectural design. I mean, I wouldn't want to live in such a place, but it looks amazing! To put it bluntly, I'd say it's like being in a major throwback to back when lol. 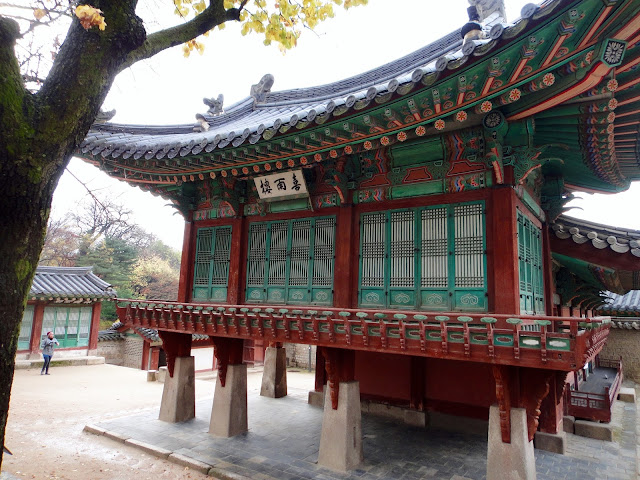 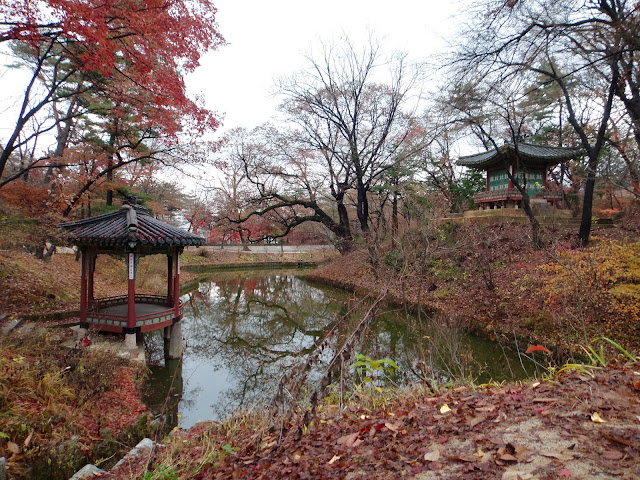 In the photo below, I wanted to see what it was like to pop through the mini doorway. According to the tour guide, this was meant for the servants and maids of the royal family. The living quarters of servers were segmented by gender, and this little door was built so that they could communicate with each other with ease! 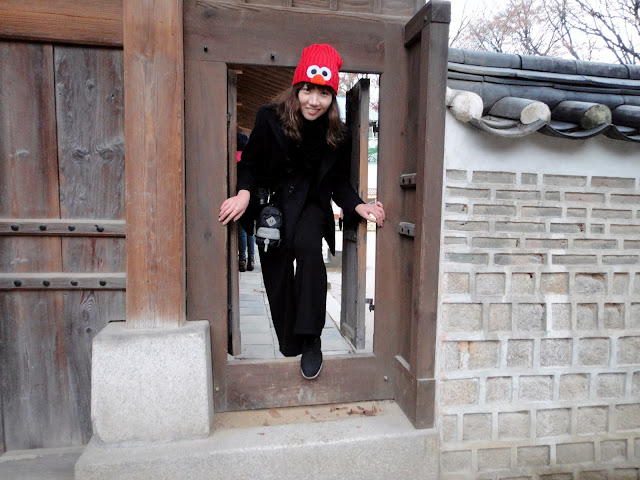 Check out how meticulous the designers were back in the 1600s! The photo below shows the ceiling of a pavilion by a pond. 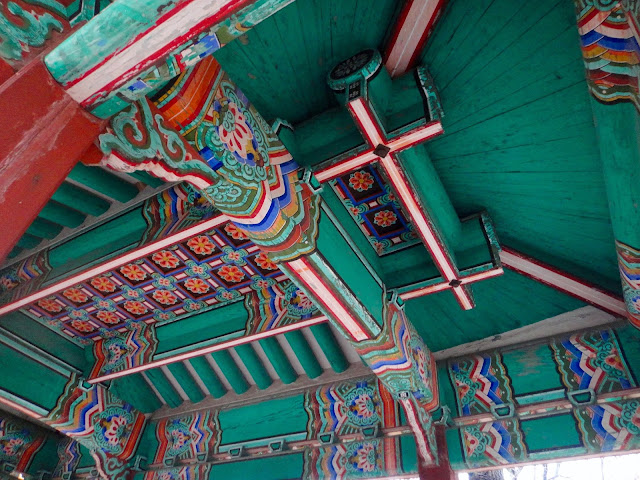 In the same pavilion is a scroll secured onto one of the support beams. The tour guide shared that this nondescript piece of paper is a handwritten piece by one of the kings who resided at the palace! Although I do have the teensiest bit of doubt that this might not be authentic, I prefer to believe the tour guide. So, I am in awe! o.o 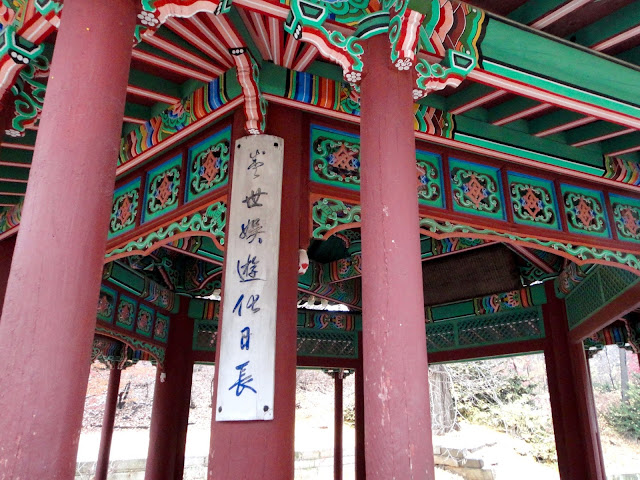 Every aspect of the palace was built with a specific reason. For example, the structures that people lived in were all elevated, so that simple heating systems could be built underneath. These systems would warm up the floor and keep people warm in winter. I thought that was pretty cool!

Another example would be the stones as seen below. You'll find numerous stones that appear to be randomly placed around the palace grounds... and you'd be right about the random part! For "fengshui"/"spiritual" reasons, the Koreans back then wanted as many stones on the palace ground as possible, so it really was pretty random in terms of placement. Or at least, that was what I understood from the tour guide! 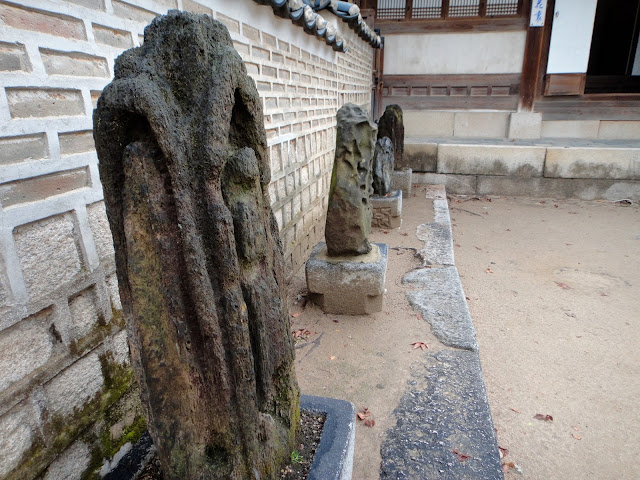 I never thought I'd be amazed by a tree while on the Secret Garden tour, but I was. Below is a photo of the 600 year old tree, thought to be planted even before the construction of Changdeokgung Palace! It's said to be the largest (19m/62ft tall) and oldest tree in South Korea, which is no wonder that it's a National Natural Monument and even has a name- Daraenamu Tree (다래나무)!

In fact, to protect it, support beams were built to keep the tree from basically losing the fight against gravity after multiple attempted assassinations by lightning.

I saw this support beam method on Day 2 and Day 3. It appears to be a common sight in Korea's touristy areas. 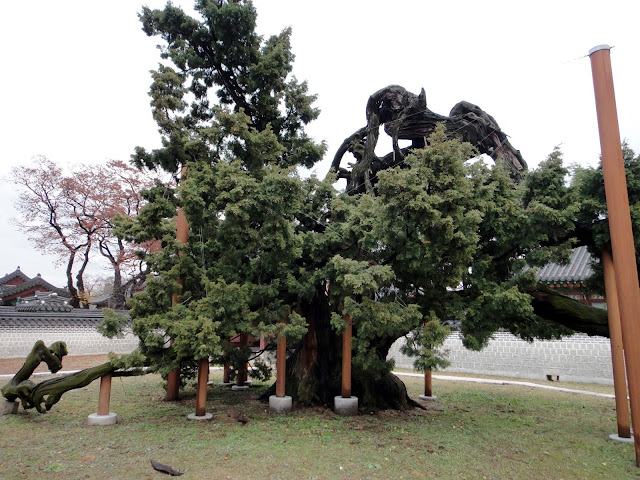 That was the Secret Garden tour. Nothing super fantastic imo, unless you're really into historical things, or nature. This is a UNESCO World Heritage Site after all!

I wasn't able to fully appreciate the beauty of the foliage and buildings. When I said I loved it, it was a fleeting love for the superficial aesthetics. I'm more like,

Anyway, have a look at this cute diner/souvenir shop! 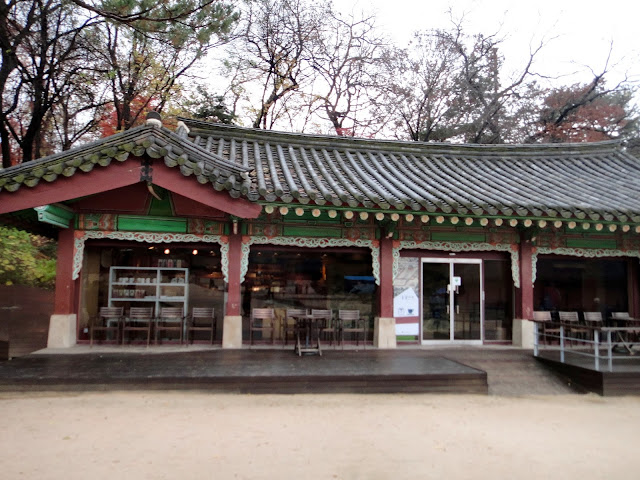 After our tour, we stopped by Myeongdong for some shopping! There's even money exchangers there with decent exchange rates, but you've got to walk around a little to compare the rates.

And naturally, the Lim Family had to stop for some food. This was our midday snack!

And of course, by having this midday snack, we ruined our appetite for dinner, so no dinner for today! We did get some street food... two trays of the exact same banana rainbow sprinkles fried balls thing. My family really loved it. I didn't really like it that much tho. 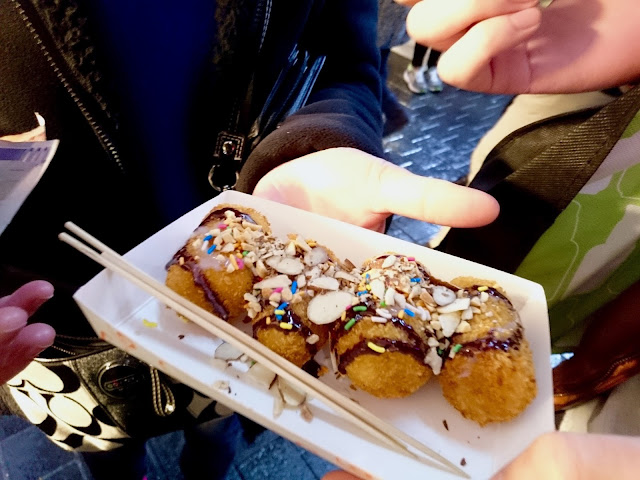 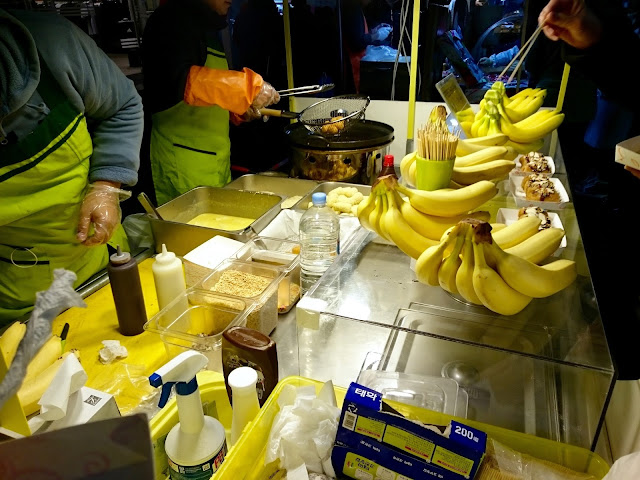 It worked out well though! Without a proper dinner, we had some time to drop by a local supermarket, so my brother could stock up on instant noodles. My aunts were raised to listen to the men of the house, so when my brother said that I couldn't buy anything because the luggage was running out of space, my aunts took it as law and I wasn't allowed to buy anything. -.-

I think it was Lotte something. 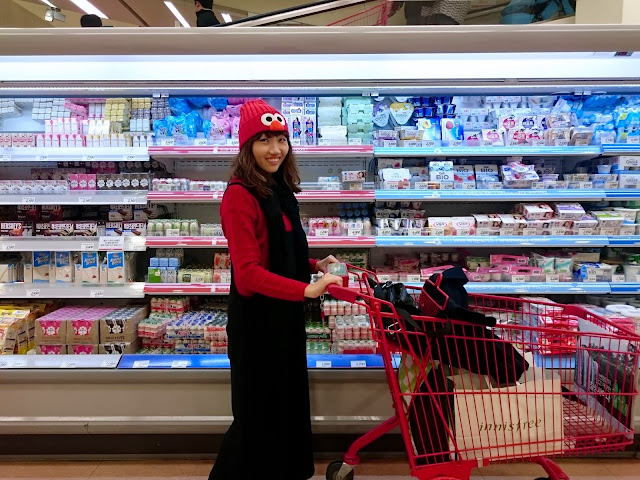 This was our last night in Korea, so we just had to have Kyochon chicken again! WE HAD TO. My brother ran off to buy some chicken before the store closed, and the rest of us headed to the check out counter at the supermarket.

No pics of our supper, but from the previous few days, I'm sure you have a pretty clear idea of what it looked like back in our hotel room.